If you believe the back windows of the taxis they drive, the taxistas of Oaxaca are a very moral group. For several months now, selected yellow taxis in the city (not the orange, blue or pink, mind you) have been sporting painted one-word virtues. Like the highball glasses my dad used to have. Though who wants to down a drink while thinking of Chastity or Prudence? And it’s not just taxis: José’s VW bug now sports Copiloto: La Reyna de Dallas (copilot: queen of Dallas) on the passenger side. Yeah, it’s misspelled: it should be reina.

But that would be me and I have to say it kind of has a ring to it. Beside, it’s painted on permanently. And the driver’s side door announces Cabeza de Piedra, (hard head, or literally, head of stone). I may have called him that a few times.

But the taxistas have really got a thing going – I find myself craning my neck after every (yellow) taxi that whizzes by to see if there’s a new virtue I haven’t seen. To date, I’ve spotted ( translated from the Spanish): 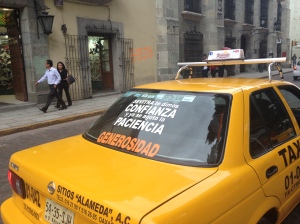 A message, not virtues

There are even a few combinations: Patience and Confidence; and my favorite to date, Order and Prudence. Some that I thought were combinations were really sarcastic messages to the taxi franchisers, which I didn’t realize until a taxista patiently explained it to me. You don’t have loyalty, and justice doesn’t exist either. We give you confidence and patience is running out (on a taxi touting Generosity). Last week I got way too close and personal with a dump truck named Compassion, who showed none by barely stopping at a red light as I tried to cross the street on foot. Now, I’m all for my taxi driver having self-esteem, though if you equate that with ego it doesn’t seem to be much of a problem. Patience I haven’t seen in much quantity, given the horrible traffic situation with other reckless drivers, careening taco carts and whole families scrammed onto scooters weaving their way through pot-holed streets, not always with clearly-marked lanes. The way the taxistas keep their horns depressed in constant honking mode doesn’t seem to carry much optimism that things will change any time soon. 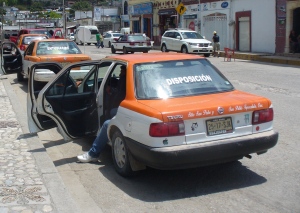 Disposition and enthusiasm in Teposcolula

Humility? Not so much. Honesty? The kind where I’m quoted a fare that’s 10% higher than normal because I’m a gringa? OK, they’ve got to make a living, and to be fair, the prices also go up when it’s nighttime, a fiesta day, or rainy season. It’s the principle, not the extra 10 pesos. It’s not just the names on the taxis, either – inexplicable labels extend to accessories as well.

Take air freshener, which they do in a big way, on paper cutouts hanging from the rearview mirror. One recently was Strawberry Mermaid, a combination I wouldn’t have thought to make since mermaids and strawberries inhabit mutually exclusive worlds. Or Jesus Plus. Jesus plus what? What can be better than Jesus? As a matter of fact, what does Jesus smell like and why would I want His smell plus more? 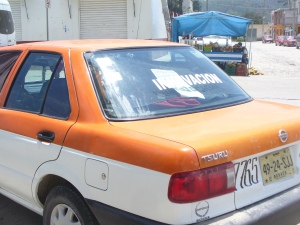 Innovation in the Mixtec

I actually don’t take taxis much around town unless I’ve wandered really far afield or it’s late at night; I live on a major bus line and instead of a $3-5 (U.S.) taxi fare, the bus costs about 40 cents and goes most of the places I want to go. Recently, though, I was disturbed by the sign behind the bus driver that featured a line-drawn Jesus carrying the cross with the prayer: “Lord, if this is my last trip, let it be to arrive to you.” (Sponsored by Eurocar). Now, I’m wondering why a car rental company (or bus for that matter) would even bring up the possibility of this being my last trip on earth, though in truth sometimes I’ve wondered it myself the way the loco driver is putting the pedal to the metal. Notice that there is no pretense of separating church and state, since nearly every public bus carries a shrine, cross or other religious saying (something else to make a list of). Kind of reminds me of that musing from the 70’s: I don’t care if it’s my time to go, I just don’t want to be on board when it’s the pilot’s time to go. But back to taxis.

Promoting friendship with the shoeshiner

Their virtue campaign has moved to other businesses — like the shoeshiners who ring the parks and zocalo — as well as taxis in other towns in the state of Oaxaca; I even saw them up in the Mixtec region when we took a Good Friday field trip to several towns (see A Great Good Friday). Those taxis have jumped the color barrier as well, since their fleet is mostly orange. Truthfully, I don’t care so much if my taxi driver is optimistic, humble or faithful, though a little discipline and patience would be nice. A few suggestions for the next round of virtues: 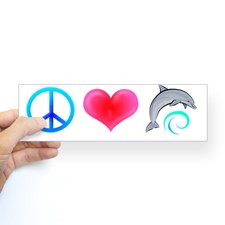 And the two that if I ever see together, I’ll flag that taxi down in a minute: Fairness and Safety. That I could get on board for. Says the queen of Dallas.