I often forget to note Mexican fiesta days, so it came as a pleasant surprise when José said he’d take a whole day off for Good Friday. I’d been wanting to explore some of the Mixtec area – the land of the “people of the clouds” in its indigenous Nahuatl language — in the area northwest of Oaxaca City, which is a Zapotec region. We packed up José’s VW bug with camp stools, picnics for both breakfast and lunch, my English guidebook and tooled off by 7 a.m. on the cuota, or toll road, towards Nochixtlán (no-cheece-tlan’). 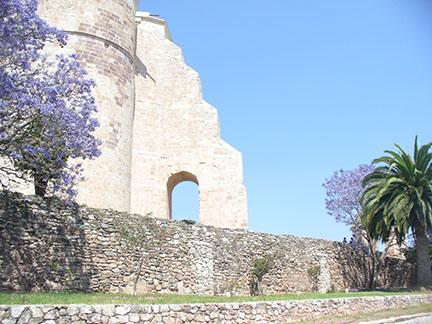 Breakfast was on the camp stools by the side of the highway, where they make and sell colorful wooden toys. A stream of migrant workers de-busing at the nearby taco stand looked enviously at our thermos of coffee and fresh fruit. Exiting the cuota at Nochixtlán, and after only a couple of wrong turns off the highway, we found the old road to Yan

huitlán (yon-wheat-lan’) about 20 miles north over the mountains: bare rounded hills with scattered trees and dirt as red as Oklahoma’s Red River region. It was a beautiful morning, cool and sunny, the light splayed over the hills like melted butter.

You can see Yanhuitlán’s massive church – officially the Templo y Ex-Convento de Santo Domingo de Guzmán – looming up from its location on the valley floor like an unbelievable mirage. The only thing I could compare it to is Chartres Cathedral in France, where I remember literally losing my breath for a few seconds at the sight of it. We came in on the back side, so that walking around to its enormous front was another breathtaking sight. My guide book said that the Dominicans who had started the church in 1541 had left space in front for 15,000 indigenous people that they hoped to convert.

They were already hanging the banners marking the Stations of the Cross when we got there at 9 a.m. By the time we’d gone through the museum of the ex-convent (where honestly, one of the most memorable features was the indoor bathroom lined with 16 outhouse-style toilets, in a square of four to a side with privacy cupolas), seen the interior with its gilded statues and 16th-century original German organ, and had a picnic breakfast with ice cream in the town square below, the procession was starting up under the arch by the lavender jacaranda tree. 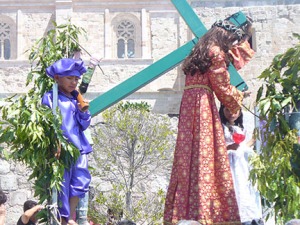 A group of older men carried a wooden Jesus and cross, along with two real children, on their shoulders, followed by young men dressed in colorful robes and wearing crowns of thorns.

A masked Roman centurion on horseback preceded the procession, and the white-robed priest led the small group of followers in a group prayer for peace, brotherhood, forgiveness and care for the hungry and homeless.

The road from Yanhuitlán to Teposcolula was beautiful, through the red mountains and into the tiny town moved to the valley floor from the hillside some 500 years ago by those bossy Spanish conquistadors, who found already well established Mixtec towns flourishing but couldn’t leave well enough alone. As in Yanhuitlán, los Españoles used native talent (probably more accomplished stonemasons and builders than they) to carry out their masterpieces, promptly naming them after their own people. 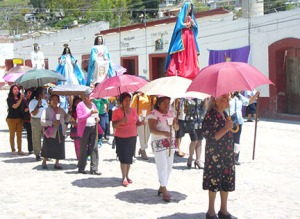 Women carrying the image of Mary in Teposcolula

Somehow we managed to arrive in Teposcolula (whose full name adds San Pedro y San Paulo) right as the procession started there. This was el encuentro, the encounter: Mary suffering at the foot of her son’s cross on the Friday that he was crucified, without the memo of the coming resurrection. A group of men in purple velvet robes with hoods carried the imagen of Jesus on their shoulders around one side of the square; around the other came a group of somberly dressed women carrying Mary on their shoulders. Under a canvas tarp to shield the small crowd from the blazing early afternoon sun, a priest marked the encounter with prayer and song.

In the shady zocalo, people enjoyed the day off: kids ran and played with balls and soap bubbles, lovers smooched on park benches, and whole families just sat and ate raspas (what we’d call snow cones in Texas), potato chips, churros and more — I bought a bag of sweet white candy that had to be chipped off a block with a chisel, but tasted a lot like my grandmother’s divinity, plus a hunk of crystalized biznaga, a type of fat round cactus.

I love that Mexicans can make a day out of doing nothing: it’s a holiday just not to work. There really doesn’t have to be much activity involved, besides eating.

Sure, there were those checking their phones, but most were just . . . sitting and enjoying the shade. We had our picnic lunch – ham sandwiches, ensalada of nopales and cucumber, and agua de jamaica brought from home – there under a tree too.

Passing back through Nochixtlán we took a stroll down the crowded market street and through the zocalo; everyone there was sitting, eating and drinking too. The procession of white-robed priests carried Jesus out of the church; that made three so far for the day.

The Procession of Silence, Oaxaca

Back in Oaxaca, even after a tiny nap to get over the day’s travels (and more than 13,000 steps on my pedometer!), we still managed to catch the Good Friday Silent Procession on Alcalá. I thought it had started at 6, but this being Mexico it was still winding up at almost 8:30. There were hooded guys dragging crosses – actually penitents, but their pointy hoods look scarily KKK to me, a native of the American south – virgins on platforms, flag standards, crowns of thorns, everything.

On the walk home from the final procession, we stopped with a handful of passersby to listen to a lone guitarist beautifully singing the songs of Álvaro Carrillo Alarcón in front of the statue of the native Oaxacan singer and songwriter, most famous for his beautiful ballad Sabor a Mí. Believe me, the Spanish sounds ever so much better than the translation of “taste of me” and even though every mariachi band and busker in town has a version of it, it never fails to move me.

It turned out to be a three ice-cream (two vanillas with lime plus a cappuccino raspa), four-procession marathon of a fiesta day.

It was a great Good Friday.

4 thoughts on “A Great Good Friday”