November 9 felt like the Day of the Dead, although the real Día de los Muertos had happened the week before. All I’ll say about Election Day is that since I had gone out to a neighboring village to be with my friend Michelle in case I needed moral support, the internet streaming was non-existent and we ended up listening to election coverage on Sirius radio in her parked car. I did need the moral support plus a whole lot of Snickers and some mezcal to make it through the night, but that’s another story for another time.

So through Election Day trauma and even though Mexican Revolution Day and American Thanksgiving have both come and gone, I never had gotten around to really processing this year’s Day of the Dead. 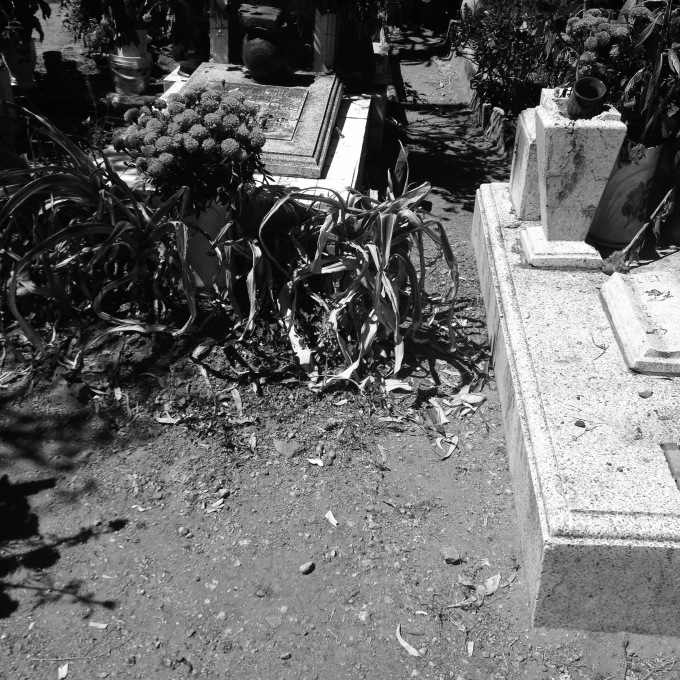 The harem suit my first Day of the Dead in Oaxaca, 2009

As it is every year, Day of the Dead here in Oaxaca is a strange and wonderful mix of the  religious and the secular. The religious part of it goes back through the Spanish conquistadors’ overlay of a day of honoring the dead to indigenous beliefs that the departed physically come back to our world one day a year. The secular part of it is Halloween on steroids with a touch of Mardi Gras thrown in, costumes and all. I did a little of all of it.

Harem suit revisited at Michelle’s Day of the Dead party, 2016

On October 30,  Michelle had a blow-out party at her house in Teotitlán del Valle, a small town on the skirt of the mountains about 20 miles from Oaxaca City. A large number of family and friends, both gringo and Mexican, showed up, costumes optional. For the record, I got another wearing out of the harem costume I’d brought down for my first Day of the Dead in Oaxaca seven years ago. It had started out life as a theatre costume I’d made for a production of Oklahoma! (trust me, there’s a fair scene with a troupe of dancing harem girls) and since I’d sewn them all, it seemed perfectly fair that one ended up in my permanent possession. It’s a little “I Dream of Jeannie” without the bare midriff, which I haven’t showed anywhere in public for about, oh 40 years now. And with an elastic waist in the satin pants, actually fairly comfortable. I just had to mess with the hat elastic a little to get it to stay on my head.

Gene and Jeannie, aka. Pépé and Susy

There was live music and dancing on the outdoor terrace, great food and company, and as always at Michelle’s, a good time was had by all. Pépé was tricked out in a double-breasted suit with bling and could have been mistaken for a drug dealer but also sported a Gene Simmons mask.

I had been elated when the previous Kiss star mask had been stolen out of his Volkswagen bug along with the battery, but before I could get too happy about it, he’d bought another one. Since the last bus leaves Teotitlan for the city at 6:30, I’d arranged with a local taxista to drive us back and we dropped friends Siobhan and Spencer back to their house in rural Lachigoló, where it would have been a 20 minute hike from the highway. 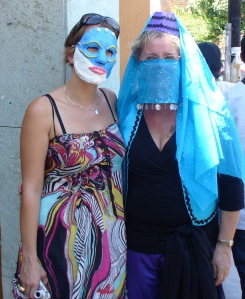 On November 1, co-guide Micky and I led one of seven special Day of the Dead tours sponsored by En Vía, the women’s microfinance organization I’ve volunteered in for six years. (Emily Berens: your name is spoken on every tour! Emily was my first girlfriend here in Oaxaca and still holds a very special place in my heart). Proceeds from the English-speaking participants go into the loan pot; this was a special holiday tour to understand more of one family’s celebration of this most important of Mexican holidays.

The panteón in Teotitlán del Valle, just before the difuntos left the premises Nov. 1

Day of the Dead is a little bit of Christmas, homecoming, Halloween and Mardi Gras rolled into a celebration that doesn’t celebrate death, but is a time for remembering the lives and memories of our departed friends and family. It’s the time of year when most Mexicans come home, because home is where the spirits of the departed (los difuntos) are going to come when they get their pass from the panteón. 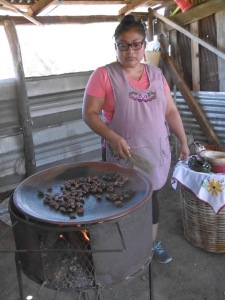 Our group of 11 participants – family and friends celebrating a 50th birthday — travelled the 30 minutes or so to Teotitlán del Valle by van to the home of Licha, who showed us some of the traditional process to make the hot chocolate served with pan de muertos on this holiday. Licha rode with our van over to the house of her sister Silvia, who’s along with their mother Crispina are in the same En Vía loan group.

Silvia and her husband Agustin shared the family traditions behind their ofrenda, the special offering on the altar that is always part of the living room – which features a wooden saint that her great-great grandparents brought here more than 100 years ago. There are traditional elements for Day of the Dead: candles to light the way from the afterworld back to this one, food (peanuts, egg bread and little apples) because it’s been a long trip and they’ll be hungry, and especially their favorite drinks – usually mezcal – because of course they’ll want to celebrate being home with the family again. And the family will want to celebrate their return as well.

The meal would be yellow chicken mole tamales, only yellow, Silvia explained – because strange things had happened when a family of “non believers” didn’t serve them and their special altar candle had fallen over and broken. They knew the muertos would have come because the food on the altar would have diminished in the night. And the family would thoughtfully put out a petate (straw mat) in front of the alter just in case the muertos (or their living family members) drank a little too much mezcal and needed a lie-down before journeying on.

As per town tradition, the firecrackers went off at 3 p.m. sharp and church bells began ringing to celebrate the arrival of the muertos. The bells would be rung without ceasing for the next 24 hours, when the difuntos had to be back at the panteón, where the celebrating would go on all night. For the next two days, it would be a fiesta of not working (more strange things had happened to those who didn’t believe in taking off work, confided Silvia), and paying respects to family and friends at their houses, where there would be more food and mezcal. 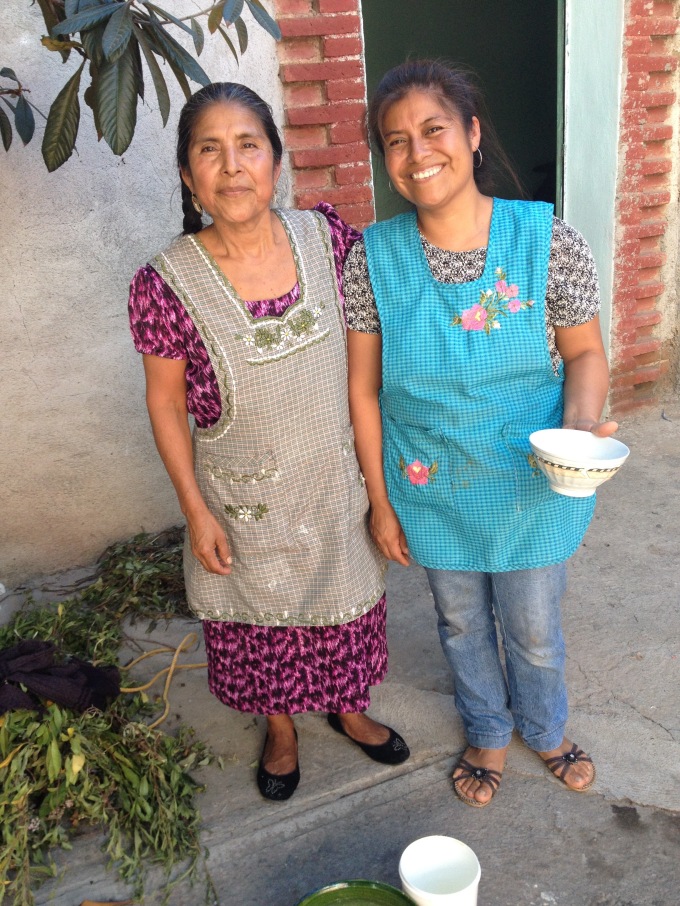 My November 1st , after the tour was over around 4, ended with yet another party, this one thrown annually by friend Jane, whose late husband Thorny is buried in the main panteón. First José and I paid respects to the joint grave of his parents, his mother only having died September 30 this year. There’s just a mound of dirt and two simple metal crosses with their names on them, but one of his siblings had left marigolds on the mound. We had brought two small candles which kept blowing out in the breeze, so Pépé scrounged two Styrofoam cups from the area and put them around the votives.

Thorny’s party had seating for about 25 around his grave decorated with flowers and candles, a three-piece band, mucho mezcal and other booze, and two kinds of tamales. Friends and even those of us who didn’t know him but who know and love Jane were in attendance. 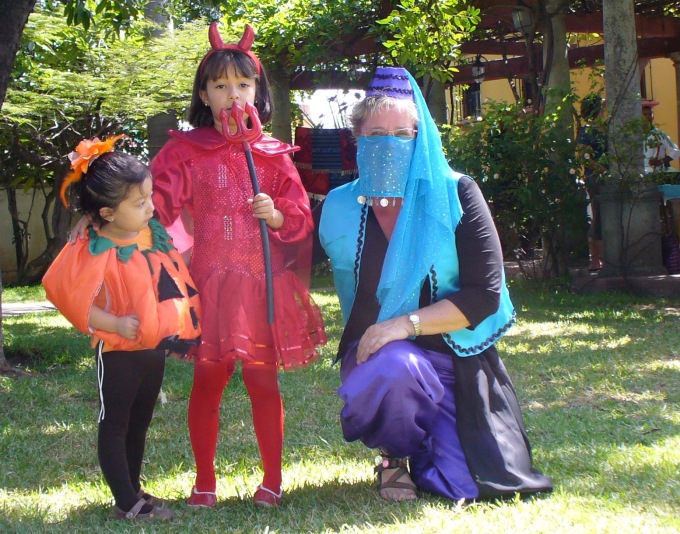 Yeah, the costumes were fun but the sacred snuck up on me this year. The home altar had added Jose’s mom Nina to the group and is but another reminder that mortality is just around the corner and getting closer every year. Or as the church custodian in the Teotitlán cemetery told us about the elaborate sand “rug” which would be dispersed to the graves in another 24 hours: From dust we come, and to dust we return.

All too true. But I did get another year out of the harem costume.