Yanet and Manuel celebrated their first Valentines Day as a married couple last month, after seven years of dating. (Though here in Mexico, February 14 is the “Day of Friendship and Love,” softening the blow of what my friend Michelle calls “Singles Awareness Day” in el norte. But back to Yanet and Manuel, whose wedding must have surely been the highlight of the season in Teotitlán del Valle, just east of Oaxaca City.

I met Yanet’s mom Enedina and grandmother Juana on my first week in Oaxaca back in the fall of 2009, when my Guanajuato language school friend Mica visited as I was settling into my new city, and we took an En Vía tour to their weaving shop. On that day Mica and I were both just paying participants in the newly created responsible tourism vehicle for women’s microfinance loans. Six years later, I’ve now been an En Via volunteer for five of those years and Mica is the organization’s full-time responsible tourism director. So it was foreshadowing of the best kind: an experience so impactful that we both wove it into our futures several years out.

Mica and I on our first En Via tour with Juana, Fall 2009

Enedina and Juana were some of En Vía’s first loan recipients, each receiving a small loan of about $100 U.S. for their family weaving business. Yanet, as an accounting student at the University of Oaxaca, eventually got her own loan to make earrings on the hour-long bus commute each school day. I’d seen the weaving business grow from being a room on the front of their house to including a café run by Teresa, married to Enedina’s son Manuel, with a tiny new commercial kitchen and two tables to serve coffee, smoothies and quesadillas. 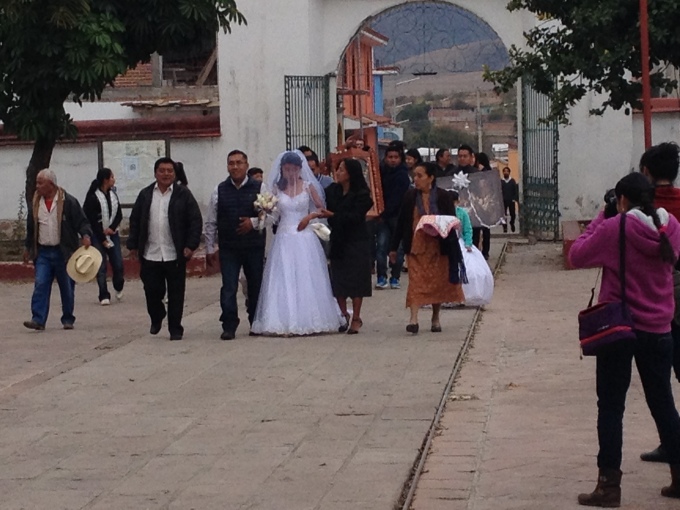 Yanet and her parents entering the church behind a brass band

Several of us En Vía volunteers, gringas all, were invited to the wedding, which started on a Saturday morning with an 8 a.m. mass and the actual marriage ceremony. To be able to be there on time, I’d packed my backpack with my all-purpose black dress and spent the night out in Teotitlan with my friend Francine, who visits every winter and who was staying in a B&B there. At 7:30 a.m. I was dressed and in front of the church, catching the procession of the brass band leading in the bride with her parents. 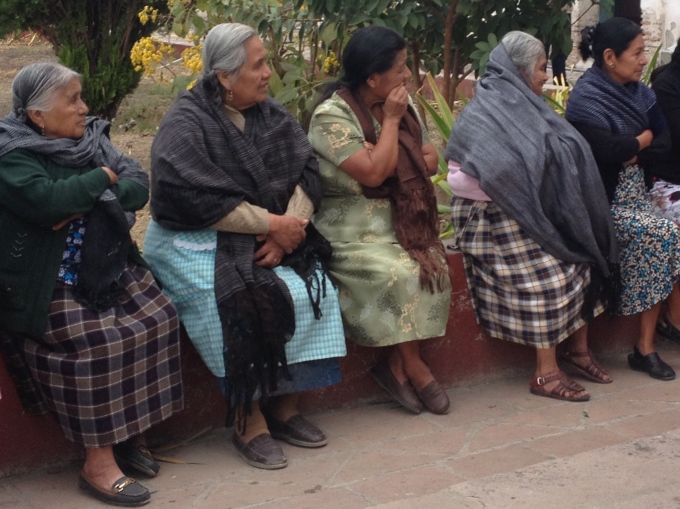 Zapotec matrons in their checked cloth-panel skirts, ribbon-braided hair and rebozos waited outside the doorway of the church, completed in the mid-1700s and today decked out with an arch of white flowers.

Inside the ornate sanctuary, it was drafty and a little hard to hear, but there was no mistaking the wide grins of the bride and groom as they came out of the church. (Interestingly, Lohengrin’s “Wedding March” was played as they entered the church, not left it.)

The bride and groom left the church to go to his family’s house, where they would set up life as newlyweds according to Oaxacan tradition.

The rest of us followed the bride’s parents back to their house just a couple of blocks away, where an army of stout Zapotec women was preparing a hearty wedding breakfast in the family compound’s courtyard for 50 or so of us guests.

There were plates of sweet white bread and hand-ground hot chocolate (each serving consisting of four huge pieces accompanied by a plastic sack, so you could take home the leftovers). 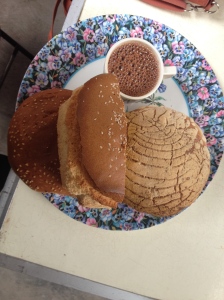 There was higadito, or scrambled egg, soup * – the women stirring the massive pots said the family had had to go to farms well outside of town to procure the 100 dozen organic criollo eggs they wanted for the special dish.

Stirring the higadito soup at the wedding breakfast

Off of the courtyard, the family altar room was piled high with wedding gifts, from dishes and kitchen appliances (8 blenders!) to furniture: armoires, dressers, tables and chairs, and a carved wooden wedding chest given by the couple’s godparents. Even a washing machine and refrigerator, still in their boxes. 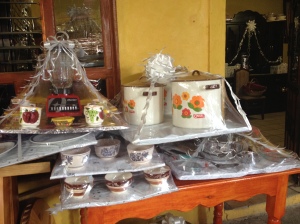 In the interim between breakfast ending and the announced walk to the groom’s house at 1, Francine and I went to see our friend Lupita, also an En Via borrower, who lives up on the hill overlooking the church.

Lupita and I at her house in Teotitlán

Lupita had recently gotten a clean bill of health after battling breast cancer all the previous year, and we wanted to congratulate her on the good news. After not being able to weave all year, Lupita had recently begun weaving small cosmetic bags again and was trying some new patterns and dye colors.

A  wedding chest from the bride’s godparents, ready to load on the truck to their new home

Just before 1, we headed back to Enedina’s, where a flatbed truck and three pick-ups lined up in front of the house and a procession of stout Zapotec men began moving and loading the wedding gifts. Whereas the move from a bride’s home to her groom’s might be figurative, this was quite literal: the gifts were loaded onto the trucks and the whole party of guests filed in behind to walk to the groom’s family’s home another four or so blocks away.

We could hear the music before we even rounded the corner to a tented entrance to the house, hanging with red bougainvilla strung on cotton thread like leis. Inside, the courtyard was set up for dinner for at least 100, with another army of helpers tending to the barbacoa and serving tiny cups of mezcal as we waited for the meal.

Having been to other weddings, I let my gringo friends know that all of the table decorations – from centerpiece plants to ceramic salt cellars – were souvenir gifts of the wedding and up for carrying away if you could get your hands on them. Across the courtyard, people began sliding plants and ceramic pigs and geese closer to their plates for quick stuffing into bags, actually provided by the hosts.

The wedding reception dinner at the groom’s family home

There was beef barbacoa with all the trimmings: chopped cabbage, cilantro, jalapeño and onion, steaming mounds of corn tortillas, agua de jamaica, blocks of cinnamon-infused hand-ground chocolate and never-ending thimbles of mezcal, those llitle ceramic cups also disappearing quickly into laps and purses. An eight-piece mariachi band played from the upstairs balcony.

Sadly, the last bus out of Teotitlan for the city left at 6:30, and those of us without private cars had to apologetically leave the party despite Enedina’s pleas to stay just a little longer. I had changed back into jeans and tennis shoes, and was toting my backpack of clothes, bag of leftover breads and hard chocolate plus a centerpiece plant, ceramic pig salt cellar and little metal flower from the wedding breakfast.

I’d been at the wedding festivities for almost 12 hours. And the dancing hadn’t even started. 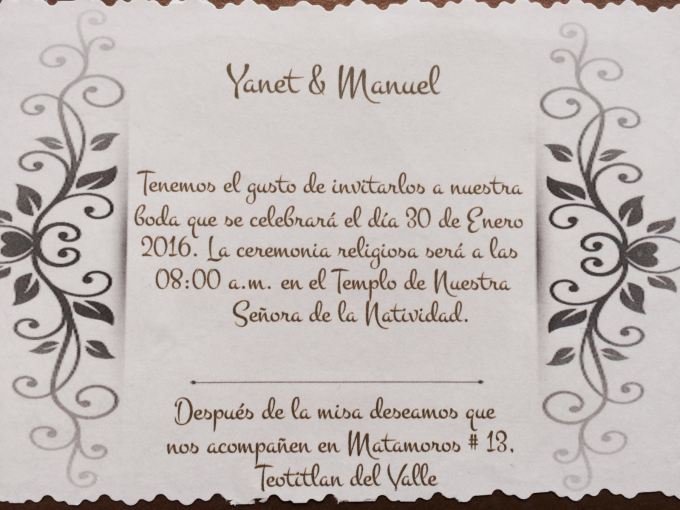 The town of Teotitlán del Valle, with its sacred mountain of Picacho in the background