What a failed 1914 Antarctic expedition can teach us about survival, sheltering and leadership 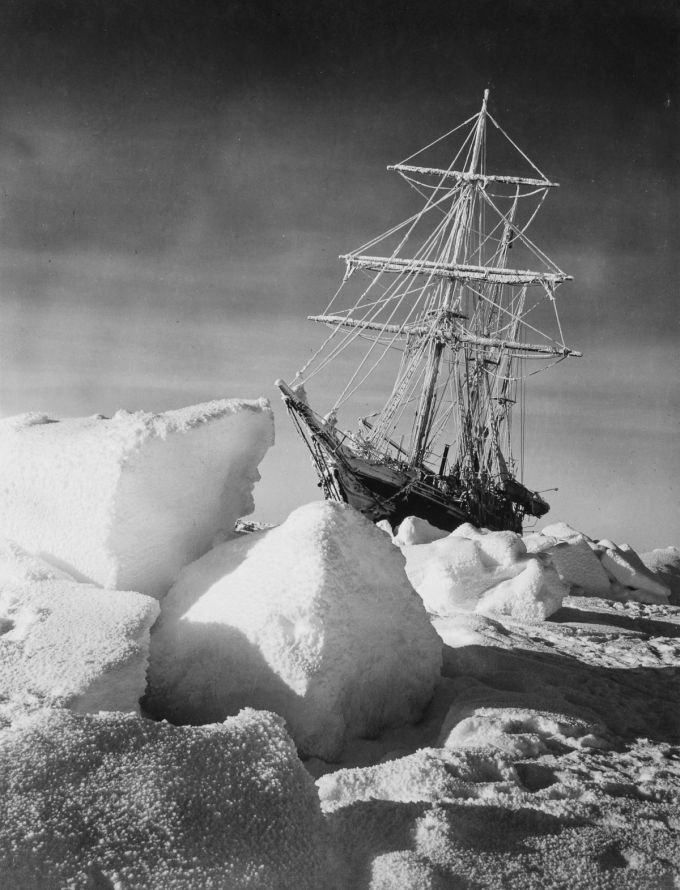 The Endurance, trapped in the frozen Weddell Sea of Antarctica, 1915

It was the ultimate shelter-in-place: a failed 1914 expedition to Antarctica by explorer Sir Ernest Shackleton that saw the ship Endurance mired and then crushed in pack ice, the 28-man crew stranded in the unforgiving frozen Weddell Sea, living off of ships’ supplies, penguins and finally their sled dogs. After living on a diminishing ice floe for a year, Shackleton and a crew of five crossed 800 miles of open water in a lifeboat, and slid down an icy mountain into a whaling station that would close for the season in just days. When on the fourth try they reached the remaining men stranded back on Elephant Island, not a single crew member had been lost in the nearly three-year ordeal.

After a year frozen in ice, Endurance was crushed to pieces, forcing the crew to an open ice floe 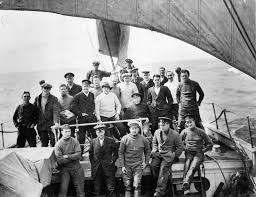 The plan of the expedition, named the Imperial Trans-Arctic Expedition, was to land on Antarctica – conquered by Roald Amundsen a few years prior – and cross 1,800 miles of the entire continent.

After two months of halting progress, Endurance became hopelessly icebound. The new goals was to hunker down and spend the winter in the ice. Sled dogs were moved off the ship and into igloos on the ice, and the ship was converted into a winter habitat.

Shackleton established a strict routine of sheltering in place: Breakfast; scouting and chores in the morning; reading, darning and walking in the afternoons; and dinner at 5:30 of penguin stew and cocoa. Hourly watches were kept throughout the night. To maintain morale, Shackleton had the crew play soccer on the ice; at night, inside the ship they played cards, argued trivia from Encyclopedia Brittanica and played billiards on a miniature rigged-up table.

Scrubbing floors on the ship

On October 27, 1915, after nearly a year stuck in the ice, with the ship squeezed to breaking point, Shackleton gave the order to abandon Endurance. The crew built a camp on the ice, retrieving supplies and lifeboats from the Endurance until it finally sank on Nov. 21. Supplies dwindled.

Shackleton kept his crew physically active, with a rota of required chores and duties

The pack dogs were eaten and still the crew drifted on their ice floe. On April 8, 1916 – another six months on open ice – the floe they were living on began to break up and the 28 men crowded into three lifeboats and began to navigate a treacherous maze of ice and sea, aiming in the direction of what they hoped was a whaling outpost. About a week later they made landfall on Elephant Island – their first landfall in 497 days, but still 920 miles from the closest human settlement on South Georgia Island. Time was running out to get help before another Arctic winter set in, which they would doubtless not survive. 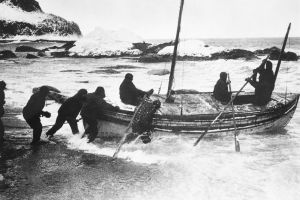 On April, 24, 1916, Shackleton set out in an open lifeboat with five men and a month of provisions in the small window of one month before the whaling station would be closed for the year. The rest of the men stayed behind on Elephant Island, building a makeshift shelter out of the other two lifeboats. After 14 days, Shackleton and crew made it to the south coast of South Georgia Island, but the settlement was on the north side. They made a non-stop 36-hour crossing of the island’s mountainous and uncharted interior, sliding down an icy mountain and reaching the whaling station just days before it closed for the season.

In “Leadership Lessons from the Shackleton Expedition,” printed December 24, 2011 in The New York Times, author Nancy F. Koehn – a historian and professor of business administration at the Harvard Business School at the time – wrote: “Real leaders, wrote the novelist David Foster Wallace, ‘are people who help us overcome the limitations of our own individual laziness and selfishness and weakness and fear and get us to do better, harder things than we can get ourselves to do on our own.’” Shackleton exemplified this kind of leadership for almost two years on the ice. What can we learn from his actions?

“As some talented research assistants and I worked on the study, I was struck by Shackleton’s ability to respond to constantly changing circumstances. When his expedition encountered serious trouble, he had to reinvent the team’s goals. He had begun the voyage with a mission of exploration, but it quickly became a mission of survival. This capacity is vital in our own time, when leaders must often change course midstream — jettisoning earlier standards of success and redefining their purposes and plans.

The observatory: Shackleton had the crew maintain their regular duties as closely as possible

‘Shackleton feared the potential effects of idleness, ennui and dissidence among his men more than he did the ice and cold. He required that each man maintain his ordinary duties as closely as possible. Sailors swabbed decks; scientists collected specimens from the ice; others were assigned to hunt for seals and penguins when fresh meat, a protection against scurvy, ran low. He also kept a strict routine for meals and insisted that the men socialize after dinner, as a tonic for declining morale. Still, collective disappointment, and tempers, flared.

“Through the routines, order and interaction, Shackleton managed the collective fear that threatened to take hold when the trip didn’t go as planned.  He knew that in this environment, without traditional benchmarks and supports, his greatest enemies were high levels of anxiety and disengagement, as well as a slow-burning pessimism. Just as important, Shackleton kept his men’s focus on the future. The ship was gone; previous plans were irrelevant. Now his goal was to bring the team home safely, and he improvised, adapted and used every resource at hand to achieve it.

“Shackleton’s sense of responsibility and commitment came with a great suppleness of means. To get his men home safely, he led them across ice, sea and land with all the tools he could muster. This combination — credible commitment to a larger purpose and flexible, imaginative methods to achieve a goal — is increasingly important in our tumultuous times.”

I know this is long, and may seem like a lot of trivial details. Any one of the seemingly insurmountable odds could have led to excruciating death – and no one would have ever known what happened to Sir Ernest Shackleton and his crew aboard the Endurance. Thanks to ship’s photographer Frank Hurley – who endured frozen fingers on the glass slides of his darkroom on the ship – the journey is chronicled in exquisite black and white.

Sir Shackleton and his crew sheltered in place for nearly three years, and under his leadership redefined and refined their goals to survive in the most inhospitable of climates in a time where there was no external communication with the outside world, no resources and no other option but to save themselves.

Most of us in the first world have Skype, Facetime, cell phones, television, Netflix, Amazon Prime, What’s App and Zoom. Pantries stocked with food and supplies – maybe not the brands we’re used to, but sufficient to survive without hunting penguins. Comfortable enough homes without building shelters of whaling boats on open ice. Board games and puzzles and crafting projects and taxes to prepare. And we are the lucky ones; across the globe, the disenfranchised suffer on the streets and in refugee camps where social distancing isn’t possible and food insecurity may kill them before the pandemic.

Yeah, sheltering in place for an extended time is frigging hard and the cost of this pandemic is painfully high: the loss of a world and lives we knew barely over a month ago and for many, people that we’ve lost either to distance or death to corona virus. We have elections around the corner and we’d better think long and hard about what we want our world and leadership to look like in a world that has been forever changed and challenged to the breaking point.

We will all have to reach inside ourselves for the best attributes we can muster: for a select few of us, the agile leadership of a Sir Ernest Shackleton; for others, the acute documentary eye of photographer Frank Hurley; for most just the unflagging obedience of the crew who doggedly pulled boats and supplies across the ice in subzero temperatures. If survival took a village in the past, it takes a world now.

The choice we have in front of us right now is how hard we want to work to save ourselves, because no one’s coming to rescue us off the ice floe. We have a choice of who we want to lead us and who we want in our tents at night. The point is, we do have options and we’d damn better get off our pajama-ed butts in front of Netflix to exercise them.

We can do this.

“The Endurance: Survival Against the Greatest Odds,” by Alex Q. Arbuckle

One thought on “Endurance”