I can think of some politicians who might have learned a few things from the meal I shared with friends this past Thanksgiving Thursday. It was a celebration across race, nationality and language, religious affiliation, gender preference and probably a lot of other mixed labels that no one thought to ask.

And it’s why, more than ever, it’s important to give thanks for what we do have because it reminds us of what we need to fight for. It’s quite possible that I’m going to become an activist at this stage of my life and I’m OK with that. A gratitude activist maybe. 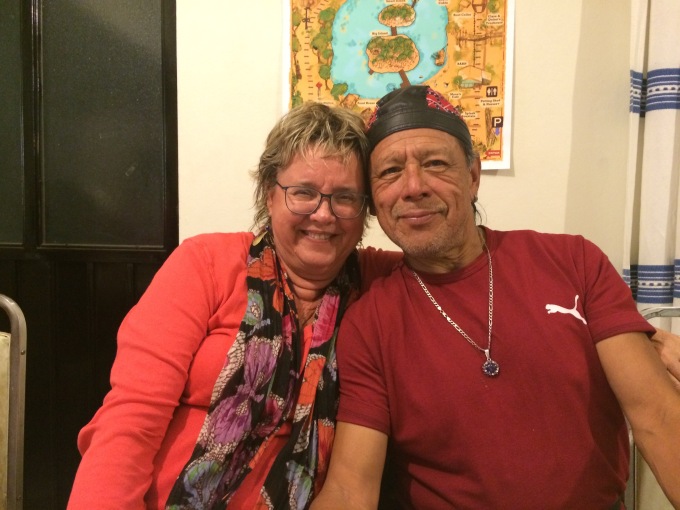 I’m a sort of immigrant myself, living most of the time as an ex-pat in Mexico, where I’m an interloper in another culture, language, lifestyle and worldview. It hasn’t always come easily to integrate into a world that I love desperately but often don’t understand, and to love people who I don’t understand culturally or sometimes even linguistically. It’s been an occasionally frustrating but ultimately enriching struggle to figure out who I am – even at this fairly advanced age – and who I want to become, aside from cultural identity. 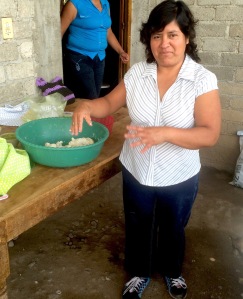 Patricia, in her home restaurant in Guelacé

I spent most of Thanksgiving Day leading a tour for En Vía  – which funds women’s microfinance loans in villages near Oaxaca City – itself an exercise in feeling grateful for the circumstances which have allowed me to realize so many dreams so late in life. I don’t take for granted one second this incredible gift of being able to live abroad again and learn another language, while still working full-time in what I love to do, and having love, friends and family in two countries. It’s incredible fortune for which I am incredibly grateful.

So on Thursday, co-guide Eda and I led a group of 11 participants to the towns of Guelacé and Teotitlán del Valle to see the work and lives of some of the program borrowers. We ate little squash stuffed with chicken, rice and beans in Patricia’s tiny outdoor restaurant, while she prepared fresh salsa borracha (drunken sauce because of being turned over and over, she explained) of roasted tomatoes, garlic, onions, cilantro and sliced grilled nopales, prickly pear paddles with the spines scraped off. We visited the businesses of Clara, who sells vegetables, and Soledad, who sells garlic when it’s in season and embroidery when it’s not. We went to the home workshops of Elia, María and Alicia, all weavers in Teotitlan del Valle. 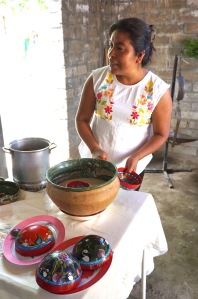 Getting back to the city around 6:30, after letting all of the tourists off and making sure the van was parked well, I hurried home to change shirts and pick up the cole slaw I’d prepared the day before. It’s only a five-minute walk to Mica’s, so I was pretty much there in time for the dinner to start around 7:30. Mica had set up tables banquet-style to accommodate all 20 or so of us, and her partner Will was in the kitchen putting the finishing touches on a gala vegan meal. The meal itself was wonderful – people had brought stuffed mushrooms and gravy, roasted sweet potatoes, mashed potatoes, homemade rolls, pies, cakes and more – but it was the whole Thanksgiving thing that put a lump in my throat. And not just because I was so far from home. 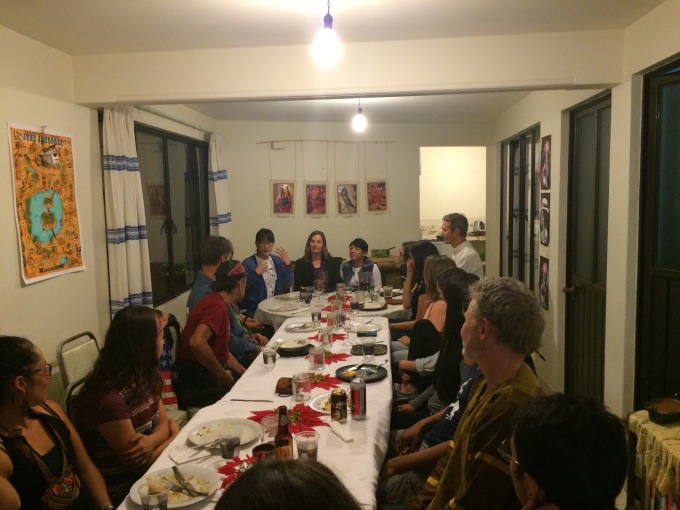 The Thanksgiving table at Mica’s house:  international, multilingual and a lot more

José and I were the oldest by several years and except for one other couple, most of the other guests were in their 20s or 30s. At the end of the meal, Mica asked us all to participate in one of her family traditions, which probably was the same for most of us North Americans: saying what we were grateful for. Although it was an almost entirely bilingual crowd, most everyone expressed themselves in their native tongue first – then either translated or had someone else translate. So we had Spanish to English, English to Spanish, Japanese to Spanish and Zapotec to Spanish. One guy from Germany just went all Spanish from the start. 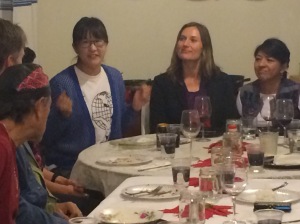 Most were thankful simply for family and friends, but there was just waking up every day to be grateful for. Celebrating a first Thanksgiving with North Americans. Having a sense of deep community here in a place where many of us have no actual family. Cultivating friends who are adventurous and who think outside the box. Having loving partners. 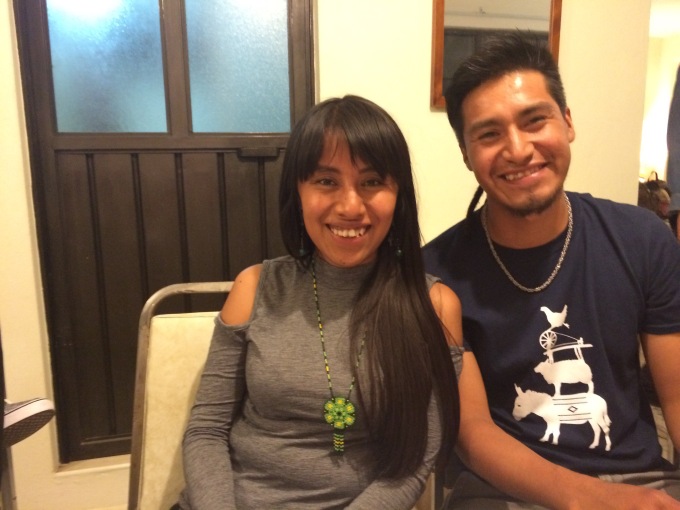 Yanet and Manuel; he’s wearing an En Via t-shirt

Manuel spoke in Zapotec; his wife Yanet (I had gone to their wedding last January in Teotitlán) translated into Spanish. Ryoko spoke first in Japanese, and Sarah pretended to translate – though Ryoko followed herself in excellent Spanish. Randy went out on a limb and used his fairly basic but rapidly improving Spanish right out of the gate, fearlessly. The rest of us got by more or less with one native tongue and one adopted one, the grammatical errors not impeding one bit expression straight from the heart. There were more than a few tears. 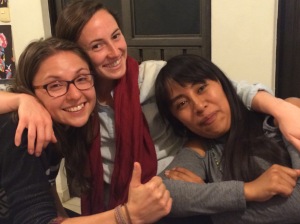 Here’s what I think I said in English and what I hope I said in Spanish.

I am so grateful for this chance to have more, exciting chapters in a book that has already had a lot of wonderful chapters – for longer than most of you have even been alive. I’m grateful for the friends and family I had back in the states for my first more than 50 years, and for the friendships and love I’ve found here in the past seven years. 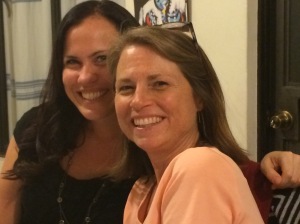 This is a time of great uncertainty for us all, and it could easily be one of great fear. I’m grateful that I’m here among people who have chosen to be light in the darkness, among those who have chosen to be positive rather than negative, among those who have challenged themselves to grow instead of remain complacent. Because in the end we aren’t north American or Mexican or any other nationality, or any of the other labels that politicians would choose to define us. We’re simply humans trying to make the best of surviving in a crazy and sometimes hostile world. And I’m grateful to be here among you all.

So I guess I am becoming a gratitude activist, and – like this beautiful Spanish language that I live in but didn’t grow up in — getting more comfortable with it every day. 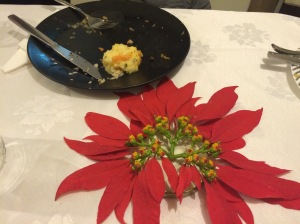 One thought on “Activist Gratitude”