We lost Lupita almost two weeks ago — on February 6, Guadalupe (Lupita) Lazo Hernández died of cancer at the age of 47. I lost a friend, but more importantly, a role model. 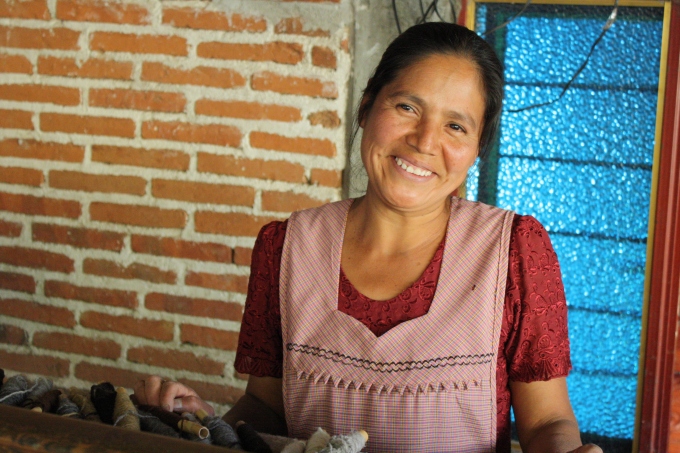 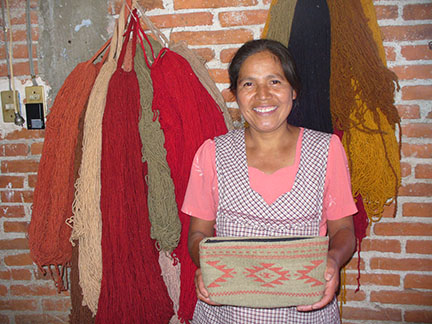 If you don’t think a 100-pound (even in her prime) Zapotec weaver living with an outdoor washing spigot and outhouse up the hill could be a role model, you’d be wrong. Widowed nearly a decade ago from an abusive, alcoholic husband, Lupita had been raising three sons as a single mom on intermittent funds gained from the sales of her woolen rugs and purses, woven with great skill and passion on a traditional telar, or treadle loom that the Spaniards brought in the mid 1500s to this town of already established weavers. 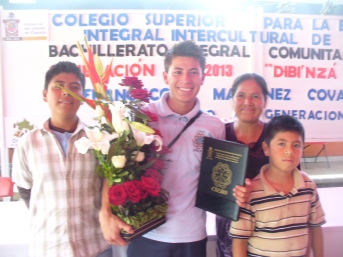 Fierce, determined and laser-focused disciplined, Lupita allowed not a drop of alcohol in her house and poured into her sons the drive to be educated, kind and responsible. Her modest house, with its dirt floors, had a combination kitchen and altar room – where at the end her body lay in state for 24 hours before burial — with a separate dirt-floor sleeping room a few steps across the courtyard.

A few years ago, when she’d finished chemo and there was still some money left in the donor medical fund the community had rallied for her, I accompanied her and the boys to buy their first refrigerator ever. We spent hours looking at the various models and features, comparing kilowatt hours of usage and finally selecting a Frigidaire with top freezer. Lupita was especially excited about the freezer, as it would allow her to go to the market less frequently and freeze meat for the boys’ afternoon comida; at their ages they were always starving. 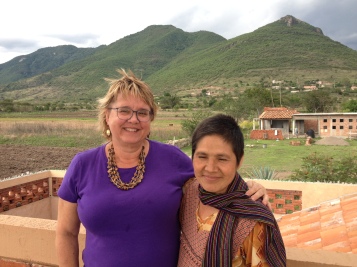 Whenever I’d think things were hard in my life, I contemplated Lupita’s lot. She never, ever complained about raising the boys alone, not ever having enough money, discovering a lump in her breast and having to start chemo right when she’d been awarded a grant to receive a commercial sewing machine and special classes from the government, not being able to work fully after surgery, having her cancer come back after four years. She’d joined an evangelical prayer group and said that she had too much left to do to be sidelined by chemo again, and would take whatever came her way without more treatment or medication. 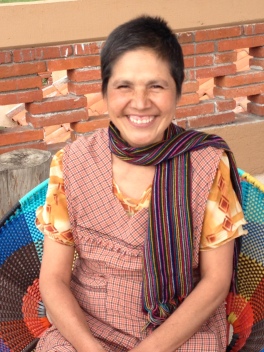 With hair growing back after chemo, 2015

And so she did. So tiny and frail at the end that she hardly took up space in her coffin, she finally let go. Oldest son Hugo had finished his semester exams in law school and was on break; middle son Dany had come home from his year living and working in Tijuana; and younger son Cristóbal had finished his fall semester of junior high.

Her day of remembrance events was a brutal six hours long, starting with a breakfast for at least 100 in the dirt courtyard of her home, as her body lay in the altar room surrounded by candles and folding chairs for a last visit with her. As is the custom in Teotitlán del Valle, each guest is served a cup of hot chocolate and an enormous plate of sweet breads – you’re expected to eat what you want and provided with a plastic sack to take the rest home. There was also rice, beans and fried eggs, plus atole, the hot corn-based drink that you can mix with the chocolate to make a champurrada. 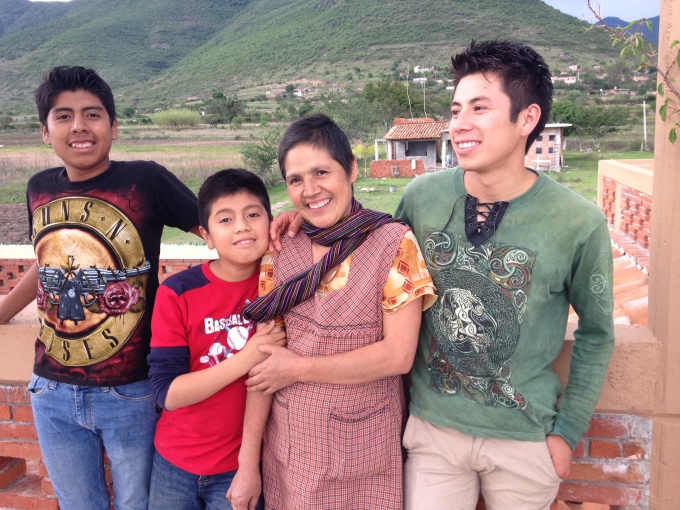 Her all-female prayer group flanged one side of the courtyard; the men sat on the other side. There were final goodbyes at the coffin, surrounded by candles in the family’s altar room just inside. A Mexican friend had advised me to bring money as that would be most needed, and I tried to discreetly hand the envelope to Hugo. “Show it to mom,” he requested, so I took it over to Lupita in her coffin, face covered with a white veil. Once I’d held it there for a minute, Hugo accepted it. 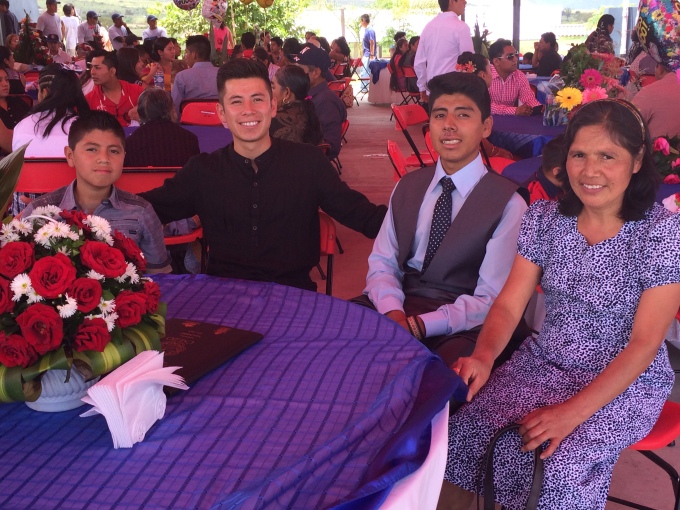 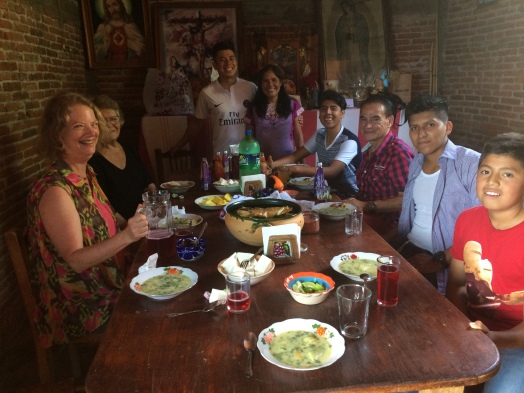 There was a 20-piece brass band playing traditional mourning music at the breakfast; they walked with us as we proceeded walking with the coffin from the house to the church, where there was an hour-long mass. Then we proceeded walking again with the coffin and band to the cemetery, through the streets of the town, to the panteón; Cris’s entire grade from the junior high joined us at the corner with their school uniforms and backpacks.

At the graveside, the boys wept as volunteers lowered the casket and began shoveling dry, rocky clumps of dirt into the grave. The men of the village stepped up to embrace them, the women somehow knowing that what these young men needed most was the comfort of other men, and exhorted them to be strong – this I’m sure of, though they were speaking Zapotec. It was hot, and the grave diggers stopped for a while in the shade while someone fetched cold beer. Cris’s classmates stepped up one at a time to hug him and whisper a few words in his ear. 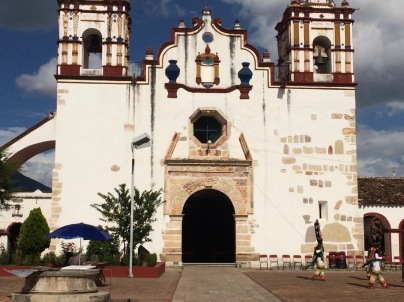 We lost a friend, a pillar of the community and of her prayer group, a dedicated mother and a powerful role model of the strength of the human spirit.

I wrote a brief memorial for the community of En Via, the Oaxacan women’s microfinance organization in which she was one of the earliest borrowers and through which I first met her nearly nine years ago. Here it is:

In Memory of Lupita Lazo Hernández

It is with sadness that we mark the passing of Guadalupe (Lupita) Lazo Hernández of Teotitlan del Valle, yesterday on February 5, 2019. She had been ill for some time battling a second recurrence of breast cancer which all thought she had beaten four years ago at its first occurrence. With her characteristic positive attitude,  she faced her setbacks  — chemotherapy and losing her hair the first round, raising her sons as a single mother, and her cancer recurrence this fall with the decision not to continue formal treatment — with great faith and grace.

Widowed around a decade ago, Lupita has raised her three sons alone as a weaver and was one of En Vía’s first borrowers. An extremely talented dyer, she once said that she favors strong colors because her mother — an admirably strong woman — used those strong colors and whenever she used them, she thought of her. Lupita was creative and fearless in trying new patterns and colors, and once discovered an unusual shade of dusty lavender when she inadvertently used a rusty pot to dye in and it completely changed the color she was trying to create, but she liked it even better! She was also a talented weaver, working in beautifully colored cosmetic bags, glasses cases and coin purses for the past several years after her operation made it too difficult to weave the larger rugs and purses she once created.

Quiet and soft spoken but incredibly strong, Lupita will be remembered her for her unfailing work ethic as a weaver and family provider and her fierce dedication to raising three fine sons, all of whom are hard-working, courteous and disciplined as their mother raised them to be. Schoolwork was always a priority in their home, and the two older boys have held outside jobs as well as weaving with their mother to support the family. She has adamantly insisted that Cris’s main work is finishing his studies.

Hugo, 22, is finishing his second year of law school at the University of Oaxaca with stellar grades, with five of seven of his most recent exams perfect 10/10 scores, and the other two 9/10. Daniel (Dany), 20, has spent the past year living with an aunt in Tijuana and working as a customer service rep and repairer of appliances; with his earnings, he recently bought the family its first washing machine which is just now being installed with a concrete pad in the courtyard of their home. Cristóbal (Cris), 14, is still in secondary school.

Lupita was born June 27, 1971, and was only 47 at the time of her passing. She leaves behind her sons Hugo, Daniel and Cristóbal, as well as siblings in Teotitlan, a sister in Tijuana, and the members of her evangelical prayer group to whom she was devoted. Lupita had an inner beauty and radiance that colored all she did and said, and was most reflected in her sparkling eyes and dazzling smile. She will be missed. 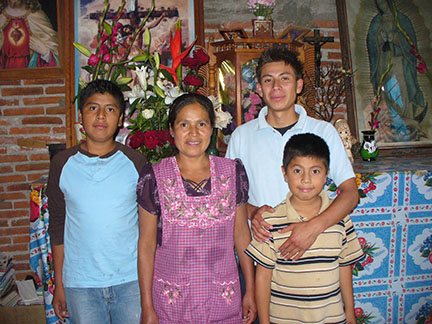 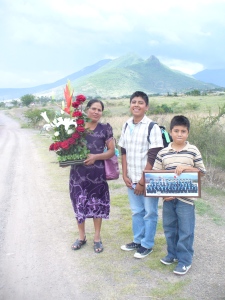 One thought on “Losing Lupita”