Oaxaca was awash in purple this week. The jacaranda trees were just losing their bloom, scattering petals on the sidewalk like lavender confetti, and the whole city was clothed in purple and white for Semana Santa, holy week before Easter.

Semana Santa is one of the biggest holiday in Mexico, much bigger than Christmas. Schools close, family comes home, apparently everyone exits Mexico City. (You can spot the chilangos here at the drop of a hat – a white derby one which they all seem to have bought in the same market stall – the men in their plaid Bermuda shorts, the women in their short-shorts and crop tops. They’re here sampling the mole and Oaxacan chocolate, out in herds on the streets eating ice cream and elotes. 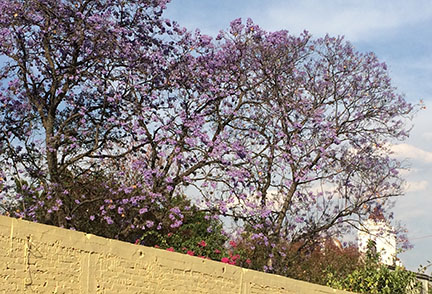 Last year on Good Friday, we had taken a day trip to see the processions in Yanhuitlán and Teposcolula (see A Great Good Friday), and danged if I didn’t forget again that José would take the day off work, since he only brought it up on Thursday afternoon.

So on Friday we packed a breakfast picnic and headed towards Zaachila, stopping to have coffee and banana bread at the 16th century monastery of Cuilápam (see Being There), though sadly the jacarandas on the side of the majestic unfinished church have had some sort of blight and aren’t blooming like they once were.

The 16th century monastery at Cuilápam, where Pope John Paul II stood in 1979

There is a marker on the site where Pope John Paul II stood in 1979 to address the faithful, and no lack of blooming lavender trees can mar the backdrop of mountains.

The unfinished sanctuary of the monastery in Cuilápam

The new fountain in Zaachila

In Zaachila, they had just finished the renovation of their town square where they hold the tianguis market every Thursday. There was a brand new fountain with a feather dancer in the middle, St. Augustine grass which may not make it very long given the heavy foot traffic on market days, and a brand-new kiosk in the center to hold concerts and dance presentations, with wooden benches scattered around. The town’s famous neverías, ice cream stands, have permanent roofs and counters; it was just a little early for eating ice cream. 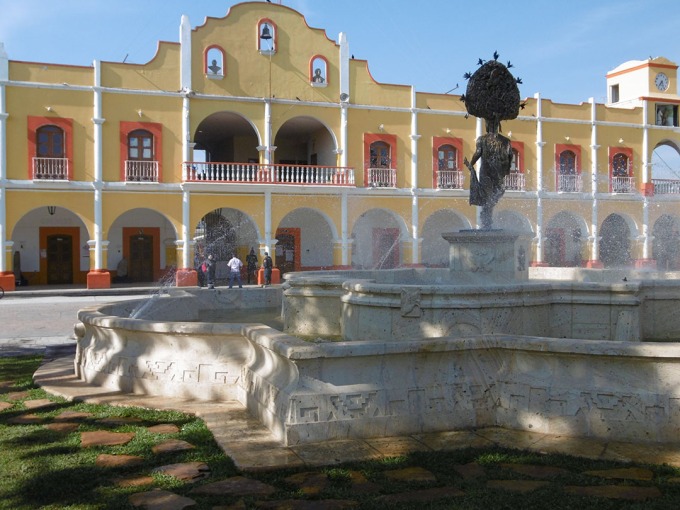 The municipio, or town hall, of Zaachila in its renovated zócalo

A day off in Mexico is just that: you don’t have to do anything special except not work. So that’s what we did most of the day, eating fish with avocados and all the trimmings at comida and heading downtown near dark, when the silent procession would be coming up the main drag. Walking, because there wasn’t a parking space to be had. To be truthful, those pointy hoods and robes are way too KKK for a southern girl like me to truly appreciate, but the imagens are lovely and there’s an air of solemnness that even affected the ice-cream-licking Bermuda-shorts clad chilangos.

Saturday we were invited to brunch out at the house of friends Siobhan and Spencer, who live in the countryside across from the small town of Lachigoló, with fantastic views of the eastern valley and mountains.

Siobhan’s good about inviting a mix of Americans, both full-time and snowbirds, along with local Mexican friends so there’s a good blend of English and Spanish and someone for José to hold court with. This time it was neighbors Pedro and Irma with their grown daughter and granddaughter Pamela, Pedro getting to show off the guest bathroom he’d just built them in eight days.

Sunday was brunch out at Michelle’s in Teotitlán, with a potluck Easter lunch and live music on the terrace. More good food and company.

They won’t get around to taking down the purple and white banners for weeks, maybe months, until they flutter broken in the breeze and hang along the fences and doorways. It’s a way of making the holiday last as long as it can, remembering a few days off work, and then getting back to the grind.

For now, Oaxaca is still and purple and white. Happy Easter.

One thought on “Purple Reign”