Brunie was already in his twilight years when my friend Stephie brought him down to live with her in Oaxaca. A gentle Jack Russell terrier with a grayed muzzle and stiff joints, he didn’t stray much further than the courtyard Stephie shared with the Mexican family she rented from. 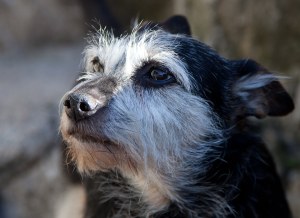 Stephie, herself a gentle graying old hippie who once drove a velour-lined love van and now limited her herbs to making plant-based creams and smoking the occasional joint, became increasingly agitated as Brunie declined. She thought he would go gracefully, on his own. He didn’t.

Stephie tried to wait him out, catering to his every need and giving him encouragement from herself and the universe to move on. He didn’t.

A local friend offered to go with Stephie to have Brunie put down by her personal vet. They made the appointment; Stephie cancelled at the last minute to give Brunie one more chance to go on his own. He didn’t, yet was in more pain each day. The friend, who was also going to help translate through the process, moved away.

Stephie called me one day in tears. The woman vet, she said, would come to the house to put Brunie down in his own bed. Could I help translate? Could I just be there? I did what we all do when someone asks something like that and you would rather do just about anything else. I said yes, of course I would.

There were other arrangements to be made: where would Brunie be laid to rest? Stephie had looked into formal pet burial, and the only place in this huge city that provided services cost an arm and a leg. Ever the old hippie, Stephie had hoped for something a little more warm and fuzzy, even finding a favorite piece of tie-dyed material that she wanted to lay Brunie to rest in.

Somehow the subject came up visiting José’s brother, El Guero (in Mexico, it’s common to call out your friends and famil 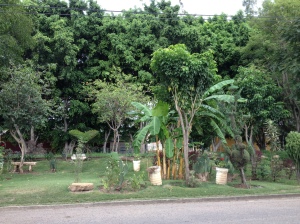 y on their physical attributes. He’s the “white guy,” the palest-skinned of all nine siblings.) El Guero noted that there were several pets buried in the garden plot he maintained across the street from his house on the railroad easement. In fact, he would offer his services for burial services and it would cost no more, coincidentally, than the toilet he needed to replace in his bathroom.

It seemed like a win-win situation. I helped pre-arrange the details knowing that Stephie would be having second thoughts again. The day came. The lady vet arrived and we knelt at Brunie’s side, Stephie stroking his ears and talking softly to him. The vet furrowed her brows; it wasn’t working fast enough. Stephie cried, I cried, the vet furrowed her brows. Finally it was over.

Stephie’s old Ford Expedition was parked and ready on the street in front of the house, tailgate open. We wrapped Brunie in his tie-dyed shroud and carried him through the courtyard, Stephie’s Mexican landlord stopping to put his straw hat over his heart as we passed.

We drove Brunie up the hill to Santa Rosa, to find El Guero and his teenage son standing respectfully at the edge of a huge, perfectly rectangular grave at least a meter deep. They helped move Brunie’s earthly remains from the car. As we stood there wondering what went next, a young Mexican couple holding hands – the woman hugely pregnant – walked up and joined the four of us graveside.

Stephie suddenly jumped down into the hole; Brunie’s tie-dyed shroud might have some polyester content and might not be biodegradable, she cried. El Guero and his son gave her a minute, then threw the first shovelful of dirt down on Brunie’s now organically correct remains. The young Mexican couple chatted softly about his hometown, Puerto Angel on the coast. We should really come and see the beaches there, they said. 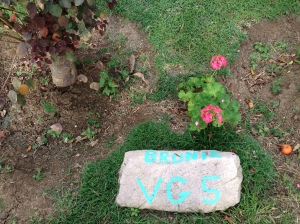 The whole day hit me full force, a tragi-comedy in a mondo bizarro world. The tears leaked out as I searched my pockets for the Kleenex I was sure I’d packed leaving the house. Not a scrap to be found.

We left the burial in progress and El Guero assured Stephie he would plant flowers next to the headstone she’d already picked out and spray-painted turquoise, the only color she could find: Brunie, VG5, Very Good Dog Number Five.

Undressing to shower at the end of the day, I discovered why I couldn’t find the Kleenex I was sure I’d put in my pocket. I’d had my pants on inside out, all day.