(that would be Sponge Bob Square Pants saying Happy Easter from Puebla), where José and I went for a mini-vacation this huge holiday Easter weekend.

Puebla is a beautiful colonial city about four hours from Oaxaca (with a volcanic-black cathedral ringed by stone angels), famous for its Talavera pottery which the Spaniards began making here with the fine white local clay. 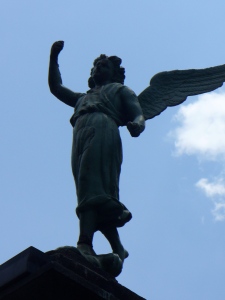 I could wax poetic that the towns were all decked out for Easter, the girls in their pastel dresses, buckets of lilies on the streets, tamale vendors busy steaming all different kinds . . .

And that would be perfectly true but the rest of the story also included a crazy ride through the mountains in José’s friend Fernando’s car, hugging the mountain curves at 140 kilometers per hour (84 mph) with Led Zeppelin blasting out of the tape deck and a surprise visit — at least to me — of another whole side of the extended family in Tehuacan.

Tía Raquel is José’s mother’s first cousin (I think), and there are a while bunch of ’em who live under one tin roof where the main sitting area is the covered parking area where the TV and outdoor kitchen are. 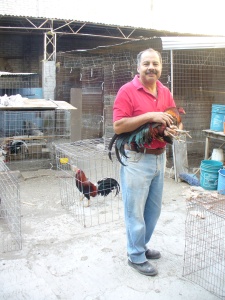 Oh, and they raise fighting cocks; that’s a cousin holding one of the champions; the vet was visiting (isn’t that a major contradiction, taking care of roosters who you make fight to the death?) and we stayed overnight at the family house, not exactly on the even one-star route.

The fam also runs a lingerie shop out of the front of their house, and if seated at the dining table can see if anyone comes in to browse. Giant gringa that I am, only the XX (pronounced doble equis-ele) fits and even that’s a stretch, literally. Not to accept a gift would be rude beyond measure, so I just say gracias.

There were indeed Easter decorations, mostly purple and silver tinsel on all of the storefronts, and in the zócalo of Tehuacan. I had a Monja Durazno, (a Peach Nun) a sort of snow cone with sweetened condensed milk and a whole peach on top, yummy but awfully sticky. Also, my new favorite flavors of ice cream are nanché and mamey, both orangey fruits that rival mangoes. 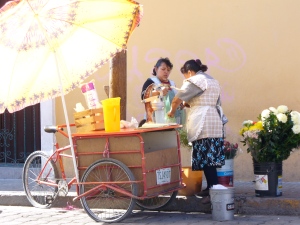 Then we did a little shopping — I bought a pretty Talavera pottery bud vase and José a Guns ‘n’ Roses death-head patch to put on his jacket as well as a new skull-and-crossbones coin purse, and visited with the relatives, who are friendly and curious about me and my world. We ate some tamales at yet another aunt’s street stand, and Aunt Sarah commented admiringly on how nice and fat I am. 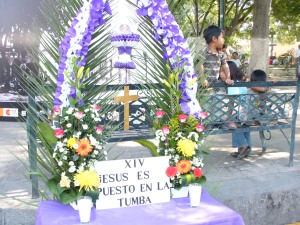 Raquel says that since my own mother isn’t still around, she’ll step in to be my mamá Mexicana (she’s about the right age) and please come back soon.

I may bring my own towel next time, but that kind of offer makes it a five-star stay.