Like the rest of my life here in Oaxaca, Thanksgiving this year packed a double cultural punch.

On one hand, there was gringo-prepared turkey and dressing with all the trimmings on Saturday since Thursday was a regular working day here. On the other, there was the opportunity to reflect on some of the things I take for granted on the thankometer every day. Running water, for instance. But I’m getting ahead of myself. 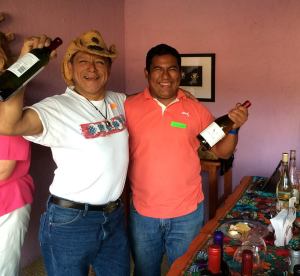 On actual Thanksgiving Day, my friend Micky and I served as volunteer guides for an En Via tour out to Teotitlan del Valle and Abasolo with an interesting group of 10 participants whose tour fees go to fund microfinance loans for the women in the villages. 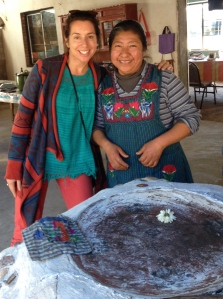 Isabel and guest at her restaurant in Teotitlán

Micky orients the group to the microfinancing program and the villages we’ll be visiting; I translate between the group and the women whose presentations are a part of their loan repayment responsibilities. We ate lunch in Teotitlan with Isabel, who last year opened a restaurant in the front of the shop where she and her husband Augustin sell the rugs they weave, but can’t entirely support their family on. Her black mole with chicken is something special, but she can’t share the secret ingredient although she will admit to almonds, raisins, two kinds of chiles and chocolate. 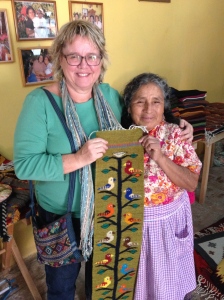 Me with weaver Angela in Teotitlán del Valle

We visited the home and shop of matriarch weaver Angela, who’s in a borrowing group with her daughters-in-law Belen and Maricela. Belen says she dreams her designs, unique figures that look like prehistoric cave drawings; Maricela demonstrates the fine weaving she does at 12 threads per inch instead of the normal six. In Abasolo, tortilla maker Luz María, makes 150 tortillas daily – though her husband eats at least a dozen of them. When asked if she makes different flavors of tortillas like they do in the states she smiles and says, yes, there are possibly different flavors to be made, but not here.

It’s a beautiful day and a great tour: lots of questions from the participants, informative presentations by the women, no huge vocabulary gaps in my translating (though I get a little confused at the explanation of indigo and oxygenated water in the dyeing presentation, more for the science than for the Spanish. They had to evacuate upper A-hall of Lake Highlands High School in Dallas when my lab partner Susan M. and I inadvertently mixed the wrong chemicals.) 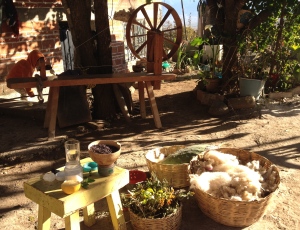 We go around the van and say what we’re thankful for on this non-traditional Thanksgiving Day, and I’m just really grateful to be in this place in my life where I’m doing pretty much exactly what I want to do. Stretching my mind and horizons, trying to do justice to the impossibly beautiful language of Spanish. With mountains, no less. 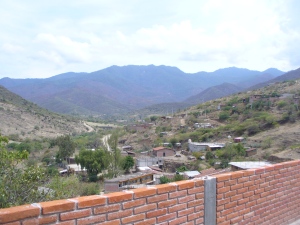 The Thanksgiving celebration is to be Saturday out at my friend Michelle’s, who has a big party-central house out in Teotitlan: pretty amazing in that to get there entails an hour of travel in a bus, then collectivo and moto-taxi with a 45-degree+ hill at the end. Still, even if she lived in a jungle hut, Michelle would be gathering the people and hosting a party, and this was no exception.

I was to be making cole slaw and cranberry sauce – if you believe the internet, there are an awful lot of ex-pats out there who need to know how to make traditional cranberry sauce when all that’s available are dried cranberries. It’s just cranberries, sugar, orange peel and juice – and a couple of patient hours at the stove. However, on Friday when I got into the kitchen to prepare my dishes, the tap suddenly went completely dry – and the landlady was on vacation for a few days.

José shone a flashlight down into the underground cistern to find a giant tangle of roots draped down the side, and a pitiful reserve of dirty water a good 10 feet below ground level. Water problems (both quantity and quality) are common here, and sometimes when cisterns run dry you have to call for a pipa, or water truck, to come fill it for about $50. I didn’t have the number for the pipa, so the rest of the day I cooked, cleaned and flushed with jugs of tap water Jose brought over from his barbershop. Didn’t get the hot shower I’d been looking forward to, though, after a sweaty afternoon in a hot kitchen. 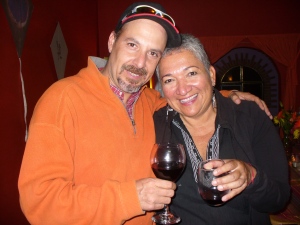 There were about 50 at Michelle’s Thanksgiving dinner Saturday afternoon; there was even some guitar playing and a little spontaneous dancing in the kitchen. But the roads are notoriously dangerous after dark, so the party broke up pretty early. (And FYI, it’s because of heavy truck traffic, not anything else you might be imagining from exaggerated headlines). We’d anticipated not wanting to drive back to the city at night, and had packed an overnight bag with an invitation to stay at friends Siobhan and Spencer’s for the night.

There was good conversation in Spanish and English, a comfortable bed and a toilet that flushed. In the morning, there was a spectacular view out their window to Lachigoló, in the eastern valley about 10 miles outside of Oaxaca city. There was hot coffee and leftover cake for breakfast, and a hot shower by invitation because it wasn’t sure the water would be back on in Oaxaca (good thing to take advantage of immediate opportunity, because it wasn’t).

Yeah, it’s inconvenient not to have running water for two days. But many of my friends in the villages don’t have running water ever, and always wash dishes in a plastic tub in the dirt courtyard. We all miss our kids – another part of being thankful on Thanksgiving Day was that I had a great conference call with my two sons in different states back in the U.S. – but there is huge comfort in gathering family of choice for a holiday celebration when you’re this far from home.

There were United Statesians (its own word in Spanish, as to say just Americans would slight both Canada and Mexico), Mexicans, Canadians, and a few Europeans thrown in. We ate turkey with two kinds of dressing, cranberry sauce with jalapeño (not mine, which was sweet), mashed garlic and sweet potatoes, and at least five different kinds of dessert. Alas, no pecan pie – Karo here is sold in the baby aisle at the grocery store (?) and is too soupy to set in a pie. Tried that a few Thanksgivings ago, didn’t work, moved on.

The water may or may not come back on today, but honestly it’s not that big of a deal. I’m just thankful to be here.

One thought on “Giving Thanks in Oaxaca”