Paco wasn’t expecting us, but then we never call first. Every branch of José’s extensive family tree is just pleasantly surprised whenever we show up, whenever that might be. Someone’s always home to answer the doorbell, which in Tío Julio’s case involves a rope running down the staircase from his second-story apartment that somehow opens the door on the street.

Paco came to the door in sandals, black socks and a pair of cut-off trousers with a belt cinched up under his impressive belly. A childhood bout with polio has left him with a permanent limp; he probably always had the attitude. His sister Lidia says when Paco was 20, more interested in motorcycles and girls than school, his dad Julio gave him one last chance to straighten up and fly right with an offer to go to mechanic school. He’s now a hotel/restaurant owner with a great mechanic shop off to the side.

We were bearing gifts that we’d packed carefully for the five-hour bus ride from Oaxaca to Orizaba: three dozen tamales – black mole, yellow, green and sweet – tlayudas, frijol paste and dried chepil leaves, all Oaxacan specialities you apparently just can’t get even in the next state over of Veracruz.

Julio’s oldest daughter Léo, short for Léocadia, runs the restaurant that features a daily $40 peso comida corrida. The day we arrived – shown to the back table where Léo rules like a mafia boss – the menu featured a choice of two soups, rice or spaghetti, beef or chicken, and a dessert of canned peaches with a dribble of sour cream. Pretty fine for about $2.30.

Léo is one of Julio’s nine kids, matched up pair for pair with the nine in José’s family, a wonder anyone can remember all the names which they actually do for hours at the dining table upstairs where Tío Julio rules from his wheel chair.

Julio and Imelda were married for 64 years before she died last fall; they were 18 and 17 when they married and had known each other since they were 13. Handsome even at 85, Julio looked like a movie star as a young man, pencil mustache to wavy pompadour.

Just saying Imelda’s name brings him to tears as the first anniversary of her death approaches. “Why did God take her and not me?” he cries. “She was the best woman I could have been blessed with.” 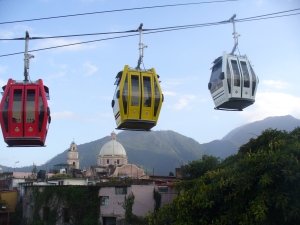 Orizaba is a beautiful little city with a river, suspension bridges and a riverside zoo, even a new cable car that goes up the cerro (though they’re having some trouble with passengers unused to hanging in space jumping out before the doors close.)

There’s a shoe store on nearly every corner, in full force as we’re here the night before school starts and it looks like every family is packing in shopping these final hours.

A pharmacy that looks like it’s been pulled out of Pleasantville has a bottle of Vino Indio (literally Indian Wine) in the window, and José has to go in and ask the pharmacist what it’s good for. “Well,” he says, pulling on his gray ponytail and showing a little more bare chest than is customary in these parts, “pretty much anything that ails you. I guess we’d call it antioxidants now.” At $100 pesos a bottle, we pass. “I think they used to call it snake oil,” whispers José as we exit.

It’s a two-hour bus ride through green and fertile mountains to Tehaucan, which lies in the valley between Puebla and Oaxaca, where Tía Raquel lives. Like Julio, she’s a first cousin (I think) of José’s mom, which makes all of her offspring his primos políticos (political cousins, literally). It just means they’re cousins by marriage, not blood. This is the branch of the family that raises fighting cocks and runs a lingerie shop in the front of the house.

Tía Raquel, like Julio, is in a wheelchair but mentally active and never without company. She has the queen’s view of the courtyard where everyone comes and goes (if you know the secret entry code of either pulling the string on the side of the front iron door or entering by the back door that goes through the taco shop next door). I have to say that except for the fairly dire economic situation most of the family stays in, growing old in Mexico is fairly appealing.

On the downside, the toilets don’t flush, the roof leaks, and there’s a lot of rice and beans on the table. On the upside, the senior members of the family have constant contact with their children, grandchildren and great-grandchildren, and someone brings in every meal. A grandson comes to play chess with Tío Julio almost every afternoon.

In three days, I haven’t spoken a word of English and I bet we’ve walked five miles a day looking at the hardware and shoe stores, finally finding the little store that sells upholstery material to buy to recover the seats in José’s 98 Volkswagen bug.

We’ve had several cappuccinos and been to one bakery in Orizaba twice to get more croissants and orange-flavored cinnamon rolls. I’m exhausted.

Should have bought the Vino Indio.