Last month, $50 bought me not quite all of a pair of shoes in Dallas. Last week, the same amount provided me the opportunity to buy into the hopes and dreams of half a dozen women in rural Mexico.

I had signed up for a tour by Fundación En Vía to its new locale, Diaz Ordáz. We participants were three women: myself, Cynthia from Seattle, and Junko from Japan. All of us had already spent some time in Mexico and weren’t new to the idea of microfinancing, but none of us had ever been to this little town. We were going to meet the women who had requested loans and hear their business proposals.

Even in April, it was already hot at 10 a.m. when we got to the house of the first prospective borrower, Estela. Mother of a nine-year-old son who stood shyly in the doorway, she told us that she had learned to embroider last year in a state-run course and now made napkins and tortilla basket covers to sell locally. She still had to buy the printed cloths and thread, with a profit margin of just a few pesos per napkin.

Then it was on to Raquel’s, whose family has been baking bread for two decades, but she has learned decorative cake making and wants to expand the family facility to include a vapor oven that can cook more specialty breads. The family sells its wares door to door, changing the selection daily. 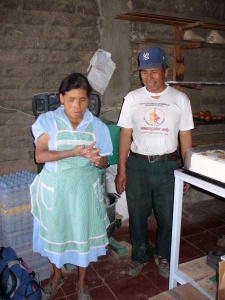 Evailda’s house was next, a small ranchito where we found her husband, son and assorted animals, but not Evailda herself. Her husband jumped into his mototaxi to go get her – it turns out her mother had died that week and the funeral procession we had seen coming into town was for her. 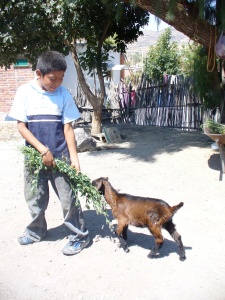 The family stood graciously in their yard and explained the process of buying chicks to resell as cut chicken meat: a profit margin of pesos per chick, hoping that none die in the holding period.

We finished the tour at Sandra and Zenaid’s tiny store, where locals buy staples such as soap, detergent and chicken feed. They would like to buy more inventory (and maybe sell one of the seven jars of Dippity-Do under the counter), plus stay open longer hours. Then we were solemnly invited to drink hot chocolate (a local specialty) and sweet bread at a large home gathering, which turned out to be a funeral reception for Evailda’s mother.

We ate, drank and had a long conversation about the burial customs overlaid by Spanish conquistadors on the indigenous culture. We were strangers made friends, welcomed into the open arms of a grieving community.

For $50, I got to buy into the hopes and dreams of a group of women I will never see again, but my day’s experience will become part of the fabric of their lives because it will help fund their dreams. And unlike the shoes, it’s something I’ll have forever.

A postscript: I’ve been volunteering for Fundación En Vías English program for the past couple of years, teaching conversational English to beginning adults twice a week in Teotitlán del Valle. This was a chance to see what it’s like from participants’ point of view on the “responsible tourism” tours that fund the women’s microfinancing loans. See more on Fundación En Vía http://www.envia.org.