Eleven-year-old Aurora was part of the package deal when her father Silvestre, machete in hand, knocked on the garden gate Saturday morning looking for a tree-trimming job for the day. After the landlady and I agreed that we’d split the cost, Silvestre shinnied up the tree and Aurora sat down on the terrace with her skinny shoulders up against the wall and pulled out a composition book and pencil.

Apparently I made friends forever when about 30 minutes into the job I took her a glass of agua de jamaica and said to let me know when she needed to use the bathroom, since I could tell it was going to take most of the day for her dad to trim the tree. Another half an hour later, she knocked on the frame of my open office door and shyly asked if she could in fact use the bathroom.

Once out, she sidled into the office where I was answering emails and – slight lisp belying a quickly apparent inquiring mind – began barraging me with questions with the speed of a machine gun. “You’re typing so fast, how did you learn to do that?” she said. “My dad says once he makes enough money he’s going to get me a computer, but I’ll have to learn how to use it. They say they’re going to get them in school but so far they haven’t.”

After answering a few of my questions – her name, age, where she lived and went to school — she stopped and put her hands on her hips. “Lots of gringas don’t speak Spanish very well,” she said with no accusation in her tone. “But you’re not so bad – how did you learn it? Do you think I could learn to speak English? This is a nice apartment; do you rent or own it? How much do you pay a month?”

“I keep at learning Spanish because I love it and I want to talk to people,” I said. “You seem awfully smart – of course you could learn to speak English if you work at it. But where I come from, how much you pay for rent isn’t a question to ask people,” I said as gently as possible. Aurora shrugged, hitched up her jeans, and went back outside to draw. The members of my Saturday writing group began to arrive, having to maneuver around the growing mound of falling branches Silvestre was creating from his monkey’s perch in the mimosa tree.

Aurora came in once during our two-hour meeting to use the bathroom again, taking a minute to astutely check out the group of four other gringa women. “Do they all speak Spanish too?” she asked. “Why are you all in Mexico? I’ve heard it’s nice in the United States; why did you all leave?” (I have to add here that the group – since Silvestre was in full view at his work – actually stopped several times with the American women cautioning me that I’d better reign in the tree-cutter if I didn’t want a totally denuded tree. I’d been told that Mexicans cut every last green leaf off when they trim, had already pleaded with him and the landlady not to do so, but still went out three times to remind him.) 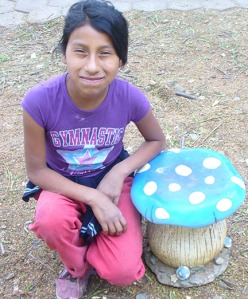 Once the group members had left, Aurora was back at the door again with a piece of notebook paper and a drawing of a big heart with little hearts around it. “I like you very much, señora” it said, “and I thank you very much for giving me agua de jamaica.” I had a sudden idea. “Would you like to make some popcorn?” I asked her. Her eyes grew round and she flashed a huge smile. “You can do that here in the house?” she said. “I’ve never made popcorn!”

So yea for the Whirlypop I bought in the states last summer, that has a manual crank and makes a huge pan of popcorn in about 10 minutes on the stove – a sort of permanent version of the Jiffy Pop that was so popular when I was a kid. Aurora turned it while I started making meatballs for comida, then when the last kernel popped, asked if she could help make the meatballs. She checked to see if the size she was making was about right, then once they were in a frying pan she picked up the dishwashing soap and began washing the dishes in the sink.

“I like a clean kitchen,” she said, “and I’m not a lazy girl. I help my parents around the house all the time. I’m pretty sure my dad stopped drinking – he hasn’t drunk a drop for four years now – because I told him I loved him and I wanted him to stop drinking and smoking.” I told her I was sure that was true and wasn’t she a loving daughter to encourage him so.

She finished the dishes, whipped up a towel to dry them, then ducked out onto the service patio to find the broom and dustpan. Kitchen clean, she asked to take some popcorn and agua de jamaica out to her dad, who was by then taking a lunch break. By then she’d hung around long enough for me to give her a pencil and pocket composition book she’d been admiring (the only one I’d found small enough to fit in my purse, though I wasn’t that keen about the Virgin on the cover; Aurora was) and a small soup tin with a few Dove chocolates. Which meant I really liked her, as I love Dove chocolates.

Silvestre finished up our tree and backed up a pick-up truck that had been parked out on the street to clean up the branches; I figured he’d get another bit of money selling it for firewood. He moved on to the tree of the stout, surly doctor next door, the one Jose calls El Gordo and whose only social interaction with us neighbors is to complain about various parking and motor-running issues on our common driveway. 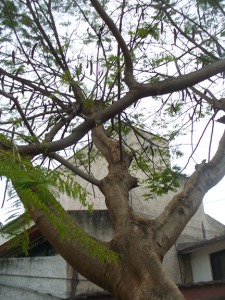 Silvestre started on the next tree (with El Gordo himself setting up a supervisory position from a folding chair almost underneath) but it began getting dark and I could hear Silvestre shout down that he’d have to finish up the next day. Aurora came over to my courtyard to get her backpack and knocked on the door once more. She was talking so fast I had to ask her to slow down, but what came tumbling out excitedly was “100 pesos for me!”

“I already paid your dad, sweetie,” I said. But she said, “No! A hundred peso bill fell out of the tree and landed at my feet, like it was falling from heaven! Dad said it was mine to keep!”

I smiled. Some things do just drop from heaven.

2 thoughts on “Aurora Lights Up the Day”